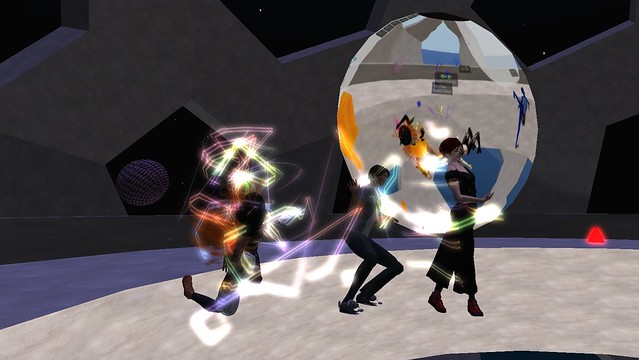 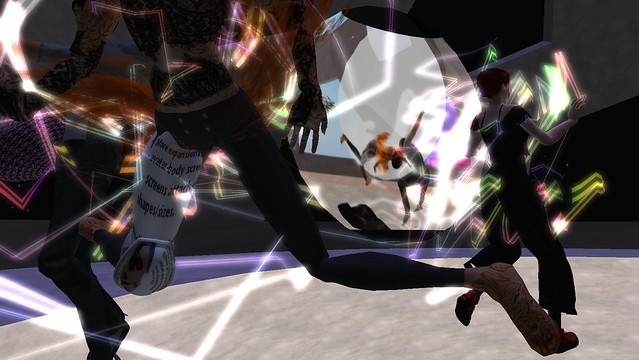 Senses Places is an ongoing collaborative transdisciplinary project creating mixed reality participatory performance environments that engage participants in a physical and mediat(iz)ed kinesthetic/somatic movement relational experience. Isabel will discuss Senses Places artistic vision towards mixed reality embodied interfacing encompassing instead of simply substituting the physical body and environment. The focus will be given to the latest process experimenting with simultaneous modes of embodied movement interaction by engaging physically and virtually through different bodily senses, particularly kinesthesis. What will be of our virtual presence and activity without our physical embodied engagement with the machines? The transdisciplinary dance/performance art-tech approach develops improvisational situations on somatic based practices, including CI, Butoh, Yoga, Tai Chi that contribute to and expand our awareness and communication channels. We believe that this kind of approach promotes healthy and evolving interactivity with and through intelligent machines.About the OpenSimulator Community Conference 2016: The OpenSimulator Community Conference is an annual conference that focuses on the community around the OpenSimulator software. The conference features two days of presentations, workshops, keynote sessions, and social events across diverse sectors of the OpenSimulator user base.

Let’s allow our bodies to interact intuitively, attaining for close/intimate/inner/somatic/energetic/kinesthetic connections, bringing into play our senses and subjective trans-cultural backgrounds. Our common concept is the experimentation and reflection upon the very shared interfacing experience and what kind of dance we develop through this mixed reality approach. The experiment is anchored in the sense of embodying and how we adapt to different mediations of self, others and environments 😀

All the thanks to Selena Chau!!!!

Senses Places is an ongoing collaborative project creating mixed reality participatory performance environments that engage participants in a physical and mediat(iz)ed kinesthetic/somatic movement relational experience.  We foster possibilities for multiple embodied and environmental interactive amplifications and permeations by designing/choreographing physical-virtual interfaces with/through avatars, video images, bio-signals and aspects of environments, based on live videostreams, webcam, and biometric devices, towards new inclusive modes of embodied sharing, exchanging and creative community.
Taking place in a shared virtual place* at Second Life’s MUVE, and at remote physical places, private or public, depending on the international collaborators in Japan, Newfound Land, Portugal, The Netherlands, Brazil, and New Zealand, the project builds site specific hybrids, evolving through each mixed reality instantiation, in a collaborative process of physicalizing the virtual and virtualizing the physical, where participants generate unknown posthuman corporealities.
Senses Places was an invited project at Metatopia 1.0 exhibition, integrating the ensemble of in progress Metabody projects at MediaLab Prado. In this site specific environment, Senses Places was installed inside a deformed tent constituting its smallest and most intimate physical instantiation. 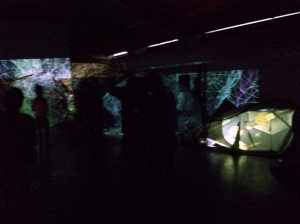 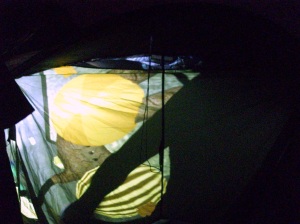 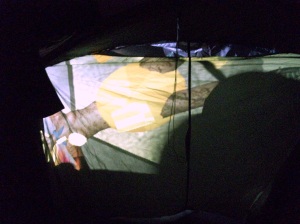 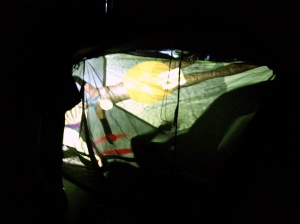 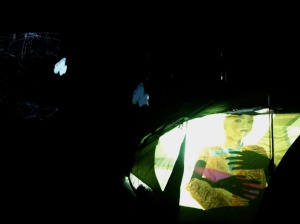 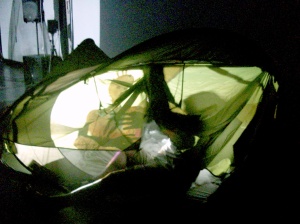 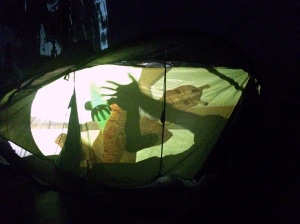 Synopsis
Senses Places is a mixed reality collective performance and participatory environment that follows an ongoing process towards a kinesthetic/somatics embodied mediat(iz)ed communication. We engage in converging our physical, avatar and video embodiments through live videostreams, webcam, and biometric interfaces at the Second Life’s MUVE. This performance will integrate one of 15 episodes of a larger 3 day performance premiere, Parad is0, no hay billetes, from Salud Lopéz (LaboratoriosSLD), in residency at Casa de las Artes de Alanís de la Sierra, Spain.
For this performance we will engage with the excretory body system (lungs and skin), on a somatic mediated experience and extrapolating meaning, such as embodied multiplications, continuing to mingle our different hybrid embodiments towards an emerging integrated reality.

– What subjective and shared inter-subjective kinesthetic/somatic embodiments can we generate towards an integrated reality through an intertwining of physical, avatar, and image, and environment interfacing?
– How is this state of expanded awareness in action a form of meditative mediation, opening and noticing multiple communicative channels?

Let’s allow our bodies to interact intuitively, attaining for close/intimate/inner/somatic/energetic/kinesthetic connections, bringing into play our senses and subjective trans-cultural backgrounds. Our common concept is the experimentation and reflection upon the very shared interfacing experience and what kind of dance we develop through this mixed reality approach. The experiment is anchored in the sense of embodying and how we adapt to different mediations of self, others and environments.

SCORE
This score proposes performative situations based on improvisational and integrative Eastern-Western dance approaches. During the performance the participants/performers choose at least 2 situations to engage with and relate with others, change them at will, and are invited to play their own animations or HUDs towards emerging connections from the eclectic/hybrid embodiments.
Although there is no fixed sequence, we propose to start in a circle, getting further closer to each other, including touch or a senses of one body, and explode in all directions. Moves and auras related to the energy/excretion.

Once we are working with the excretory system, we would like to propose that we try this time to start working with
Breathing – specially breathing out/exhaling and add sounds coming out of the movement related to the somatic sensing of release . what about initiating with AOM?
Skin – between inner body and external environment. such as sweat, energy/aura, touch self-others
Kidneys – relation with fluids system.

A. Rooting / Grounding
Avatars: wear HUD Floor and Aura attachments: Phantom, generator k1 or other.
Action: engage in seating, lying and moving on the floor relating to webcam-avatar and videostream-images interfaces. Staying and changing poses and movement on the floor, connecting to our inner bodies and the ground, and in relation to others and environment, taking into account occasional touch or intertwining amongst performers and/or avatars.

D. In Between / Transitioning
Avatars: wear HUD In Between. Aura attachments: blue shine hands, dovefloat or other.
Action: moving between the floor, standing, and flying. animation. Yielding to and opposing gravity expanding through space. Experimenting to follow someone. Changing energy flow connecting to all body parts, others, and environment. Trying to witness/encompass all. Including Tai Chi, Contact Improvisation, and flying moves and poses.

Livestream recording of Global Underscore at Second Life site, gathering 2 avatars and 4 screens from GU sites around the world 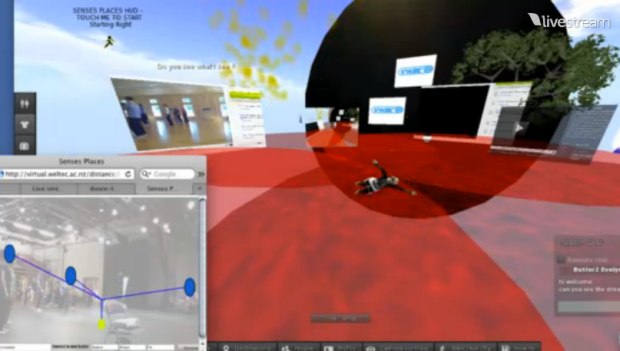 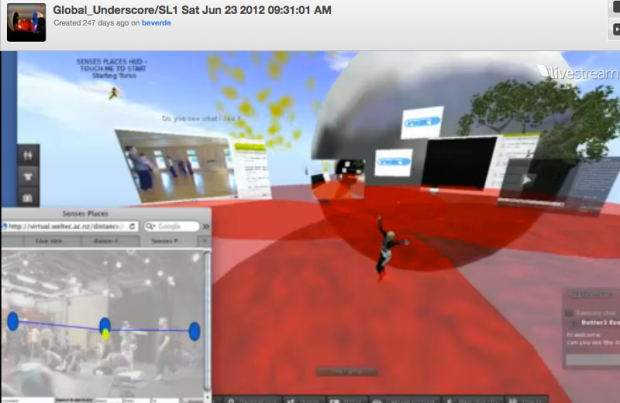 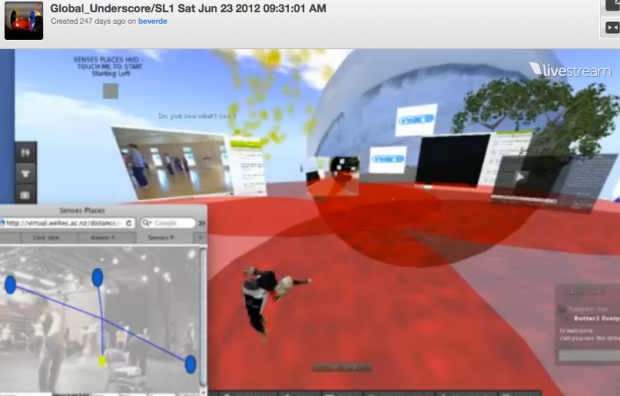 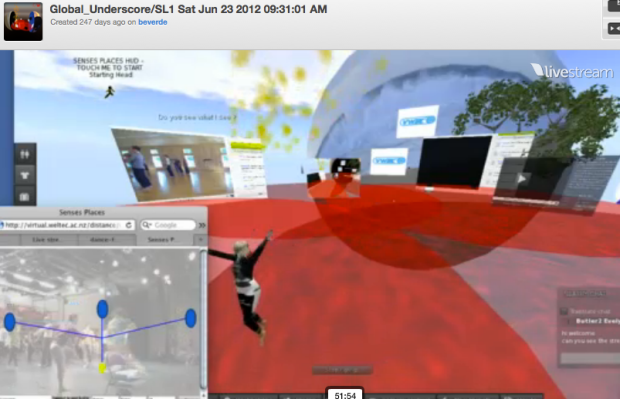 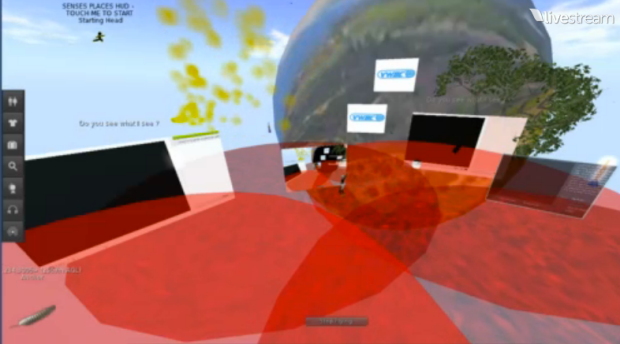 We were enthusiastic from the challenging experience, particularly for the slow net connection at the Chichester site. Still we were able to gather in the GU Second Life site 3 other sites from Brasil, Berlin, and … will confirm this later.

Anyway, the good news is that next year 2013 we are continuing the Global Underscore in SL and it will happen in Lisbon, where Nancy Stark Smith and Mike Vargas at the occasion will  give a workshop on the Underscore Practice 😀

The Global Underscore virtual Satellite @ Second Life, MUVE, enables participants and audience members from remote places, including Global Underscore sites, to gather and expand the possibilities for embodied connections. Towards a greater consciousness through listening, sharing, and improvising through the practice, the Satellite @ Second life expands our encounters and interactions through virtualization in images and as avatars. Senses Places project will host this virtual Global Underscore Satellite at its virtual site at Koru Island, and the Senses Places’ team will organize the activity and participate on June 23, 2:30 – 6:30 pm (GMT/WET) 6:30 – 10:30 am (SLT/PST).

The Second Life 3d platform is owned by Linden Labs company (2003) and its population/inhabitants, the avatars, have multiple interests, ranging from business and shopping, dating, explorations, education and artistic practice, to name but a few. At this multi-user 3d application participants animate an avatar and interact with others and the environment in multiple ways. The modalities of human-avatar interaction include chat, appearance, gesture, voice, and movement of the body, in space, and in relation to other avatars and objects.

Within SL, it is possible to simultaneously display a number of browser windows, like multiple video broadcasts. In this way we will gather the different Global Underscore streams in a shared virtual site. If this includes your site, you would be able to see and interact with/through the image of yourself in that environment, with the people in your site, and with virtual figures and images of people at other sites. The SL Satellite will also have a GU channel and will stream also in SL during the practice: http://www.ustream.tv/channel/gus2012-secondlife.

The idea is to truly expand (rather than substitute) our bodies taking advantage of the possibilities of dance somatics and digitally enabled embodied mediation and virtualization.  Adapting interfaces to our bodies, instead of the other way around, will contribute to expanding our sensory-perceptive capacities to connect in multiple combined ways with the many Global Underscore sites, satellites, for the first time including avatar participants and audience members.

The Underscore’s approach is rooted on group and contact improvisation, integrating related somatic practices, such as, Tai Chi, release and alignment, BMC, and Alexander, among others. These practices enable us to be grounded and follow our bodies’ sensory perceptions while also expanding through our images and avatars to connect with others via remotely connected improvisation. SL opens amazing interactive possibilities for creative communities of practice such as CI. Trough an encompassing connection, including an emphasis on somatic and technological mediations multiple physical-virtual vessels of communication will open among the participants and the shared environments, contributing to generating a novel integrated globality.

In order to visit and participate in the Global Underscore Satellite @ Second Life you or someone at your Underscore site needs to take some time to familiarize yourself with the Second Life interface. Here are our recommended steps:

You can also go to any other location of your choice, or simply login without choosing a place. You will be teleported to a welcome site where avatar hosts wait to help you 😀

5.  Get accustomed to the interface: the avatar and the 3d environment. It is not difficult, but it will require some practice depending on your computer interface and videogame skills and literacy. This will enable you to observe, interact, and improvise with other avatars and video stream images of other GU sites projected on to screens/browser windows.

6.  At the GU site at Senses Places/Koru Island we will share  animations for your avatar to improvise with. You can play animating your avatar with them, including changing, accumulating, looping, and moving in space. The ideal is that you can make your avatar to dance without preventing you from dancing.
7.  If you are at a GU site streaming a channel, you will be able to see your channel in SL along with the other streams. Simply copy and paste your site’s channel URL link onto one of the screens available at the site as server windows.
8.   Watch, experiment, improvise!